Of Debt, Growth And Economic Dynamics

In the article “Of Debt, Growth, Interest Rates and History” (Bloomberg) Carmen M. Reinhart continues her op-ed sparring with Paul Krugman. In this article, she describes this paper she co-authored with Vincent Reinhart and Kenneth Rogoff. It analyses 26 “high debt episodes” from 1800 and 2011.

“More germane to the current situation are the longer peacetime debt overhangs -- for example, Belgium, Canada, Greece, Ireland, and Italy in the 1980s and 1990s, and Greece, Italy, the Netherlands, and New Zealand in an earlier era. With the exception of the United Kingdom at the height of its colonial powers in the nineteenth century, these long peacetime debt overhangs are consistently associated with lower growth (in varying degrees), irrespective of whether real interest rates rose, declined, or remained about the same.”

I have not yet read the article in detail, but I have serious doubts that even if the data are handled properly that any econometric methodology could provide useful results for what they are attempting to do.

The first problem is that their study mangles together countries on the Gold Standard with countries with welfare states that control the free-floating currency they borrow in. There is no comparison of policy flexibility between those groups of countries.

The second problem is that one cannot ignore economic dynamics. If a country has slowing nominal GDP growth, its fiscal deficit will rise, even if fiscal settings are unchanged. This is because taxes are levied against nominal activity and incomes. Additionally, if the slowdown is associated with a recession, welfare and unemployment insurance payments will rise. Meanwhile, the slowing nominal GDP growth means that the denominator of the debt/GDP ratio is growing less slowly.

And it is empirically observed that nominal GDP growth follows slow-moving trends, punctuated by recessions. These trends have been driven mainly by the trends in inflation, although real growth has had smaller trends. The implication from these dynamics are: 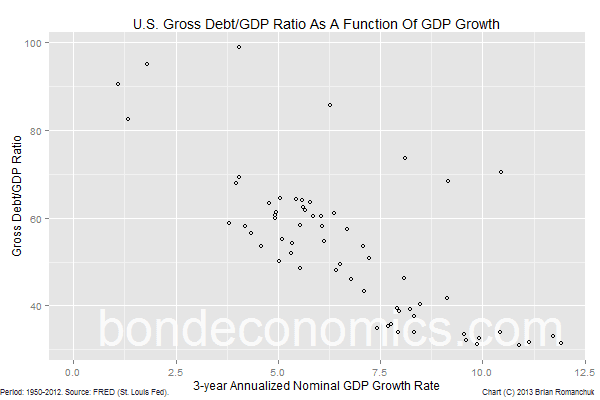 Email ThisBlogThis!Share to TwitterShare to FacebookShare to Pinterest
Labels: Fiscal, Stuff I Read On The Internet