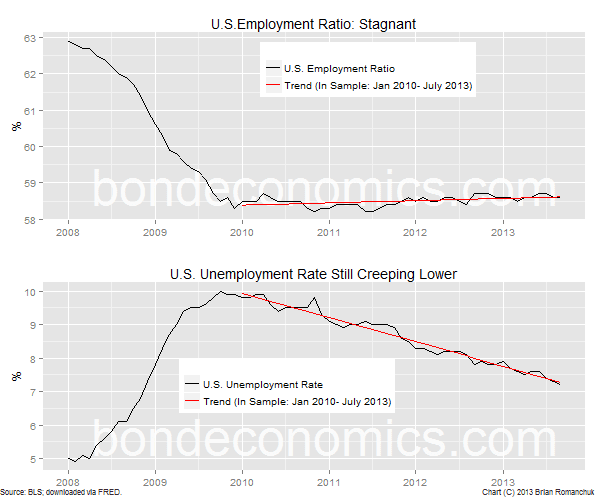 The delayed U.S. Employment Situation Report for September (pre-government shutdown) was decent, in my opinion. The market apparently does not agree with this sentiment, as the 10-year Treasury yield is down about 7 basis points at the time of writing.

The Employment Ratio and Unemployment Rate remain on their straight-line trends. The fall in the Unemployment Rate was somewhat more legitimate this month, as the participation rate was unchanged. It will take at least a couple of months to see what lasting impact the government shutdown has had on the labour market.

With the Unemployment Rate at 7.2%, the "threshold" level of 7% is now extremely close. The Fed is now facing a nasty communications problem - is the unemployment rate still useful, or has it become broken due people dropping out of the labour force? I personally think the essentially unchanged Employment Ratio gives a much better view of the labour market, but I recognise that many policymakers are nervous about this extended period of a negative real policy rate. Memories are still fresh about the perceived policy errors made in the 1970's.