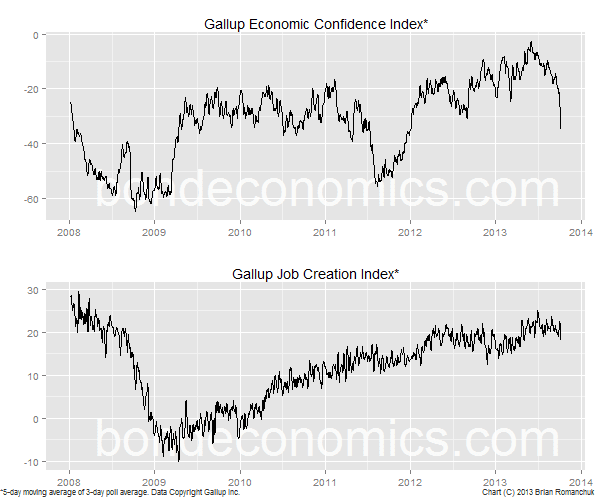 At the time of writing, there has been some movement on the debt ceiling front, but an end (or pause) to the crisis is not in sight. This article by Bruce Bartlett provides good coverage of the issues. The stock market has been pretty solid, which probably has reduced pressure on finding a quick resolution. As the chart above notes, Gallup consumer confidence is starting to crater, as it did in 2011. However, the Gallup polling has not noted a big fall in sentiment around job creation yet. (UPDATE: There are increasing hopes of a temporary agreement. Jobless Claims jumped by 66,000 this week, mainly due to the shutdown.)

Canadian bonds are presumably looking more attractive to foreign buyers right about now. The Canadian economy is heavily exposed to any accidents coming out of U.S. fiscal policy, has an ominous housing situation, and its Federal Government is not paralyzed.

Janet Yellen is the candidate to be proposed for the Fed Chairmanship. I am not a believer in the Great Person Theory of History in this context; I doubt that choosing her will have a great impact on the path of expected rates, at least for several years.

She has been perceived as a dove in recent years, but she could be better be described as having been correct on the outlook. I do not doubt that she would hike rates aggressively if inflation actually became a risk, as she has been a strong supporter of the inflation-targeting central bank consensus.

She may change Fed communications and attempt other non-standard easing techniques, but I believe that those techniques are doomed to fail. She may want to delay "tapering", but it appears that the consensus at the Fed has shifted towards the view that Quantitative Easing does little for the real economy, and so it will have to be phased out anyway. The only effective unconventional tools left for the Fed are explicitly capping bond yields, or forex intervention. Neither policies are politically plausible.

She is going to have to keep a consensus on the committee, and so she will not be able to push too far in any direction. With the vast majority of the committee nowhere near expecting rate hikes (the median forecast is for hikes to start in 2015), there is no real debate on the path of policy rates for a considerable time.

UPDATE: There has been some discussion in the blogosphere about the "triple mandate" for the Fed in a Yellen speech - inflation, employment and financial stability. For example, see this Tim Duy article. This appears unremarkable to me; financial stability is a necessary condition for the central bank to hope to achieve any other policy objective. (Whether they should aim for these objectives, and whether they have the capacity to hit them, is another discussion.) Financial stability is mainly going to be achieved via regulation, and not by interest rate policy.