When Should The Budget Be Balanced? 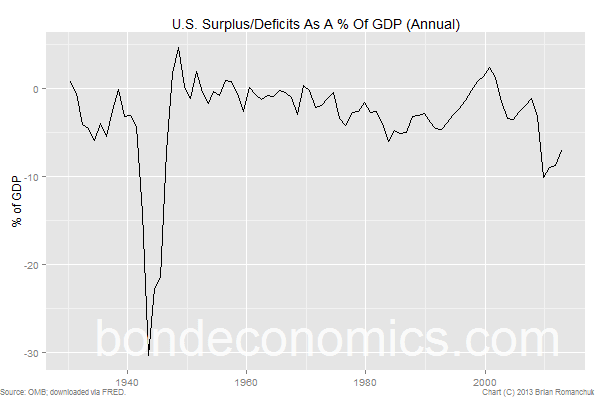 Fall is in the air in the Northern hemisphere: the kids are back at school, the leaves are starting to change colour, and we have yet another pointless debt ceiling crisis in the United States. As far as I can tell, one of the root causes of debt worries is the assumption that a government budget should be run like a household budget: it should be balanced across the cycle.

But as the chart above shows, the U.S. Federal government also never runs a surplus; it runs a deficit across the cycle. This is a relatively common occurrence for the general government sector across the developed nations; only Australia managed to run a sequence of surpluses. The fact that deficits are normal is actually a straightforward application of Stock-Flow Consistent (SFC) modelling (or practically any other serious simulation of fiscal policy). This is a theme often discussed by Modern Monetary Theory (an offshoot of SFC modelling) writers; for example see today’s article by Bill Mitchell which explains what happened in Australia.

This article is less academically restrained restatement of the ideas seen in Appendix 3.4 of this text (non-affiliate link) by Wynne Godley and Marc Lavoie. I state below some conditions that I assert will hold for a large variety of reasonable models, and not just a particular model. In other words, you could create a model that violates the asserted conditions, but the model would otherwise imply “unrealistic” behaviour.


(I put “fiscal balance” in quotes to indicate that this is an idealised fiscal balance as used in a model, and may not match national accounts definitions; see my last paragraph for a further qualifier.)

Since nominal GDP in most developed economies have had positive growth rates, the fact that deficits are common is completely consistent with these “stylised facts” about SFC models. And if we add to the SFC models the “demand leakages” that are common in the developed economies, we would see that the model budget deficits end up being even larger across the cycle. (Warren Mosler, in particular, emphasises these demand leakages; the most important of which in the U.S. is its continuous trade deficit.)

What is interesting about the SFC model analysis is that the fiscal stance of the government does not affect the statement that a growing economy will tend to have a fiscal deficit on average. The conclusion does not follow from looking at what the government sector is doing: it looks at the balance sheet behaviour of the non-government sector.

If we use a cash accounting system that is consistent with simplified economic models (not necessarily matched up with the more complex national accounts, which may use accrual accounting, etc.; I also consolidate the central bank with the Treasury), we see that:


Using this relationship, we see how we can draw the conclusions above. If the government runs a balanced budget, the total stock of government debt and money holdings in the non-government sector must be unchanging.  This implies that these stocks are falling relative to nominal incomes, which grow on average with the overall economy (the steady-state assumption). This violates the “stock-flow” norm behaviour followed by model entities in SFC models:  they keep their financial asset holdings in line with their nominal income in the steady state.

Additionally, we that any “demand leakages” which result in higher financial asset holdings in the non-government sector (for example, bond accumulation by foreigners), necessarily force higher government debt levels in a steady-state condition.

And even if one is skeptical about the model assumption of stock-flow norms, it is clear that the monetary base cannot become arbitrarily small versus nominal GDP in a monetary economy. So this result will hold even if you want to use more standard mainstream economic models.

I will end with one technical point: examination of my budget equation indicates “an escape hatch” that allows surpluses across the cycle: government investment. If we reclassify government outlays as investment, then it will be possible for the government to supply the needed financial assets without running a deficit. One example would be the monetisation of Gold in a Gold Standard regime. I view this escape hatch as being politically convenient relabeling, and is not too significant in practice. But yes, my statements above should be qualified to take this into account.